Most people think that caregivers take care of people. That's not always the case.

I was almost asleep Tuesday night when I heard an unfamiliar sound. I thought perhaps it was the cat or a squirrel in the barn. The scraping, bumping continued. I went downstairs to find the German Shepherd lying by the woodstove, legs moving as if he were galloping. It's not unusual to see any of our dogs do this, to a lesser extent, when they dream, but Meister's eyes were open and he was moving himself around on the rug. He couldn't get up. The rug was wet with his saliva and urine. He lost control of his bowels.

Almost two years ago our miniature lop-eared angora bunny did the same thing. He couldn't get up. I took him to the vet and came home with syringes, needles, IV solution, antibiotics - my kitchen looked like a hospital. My husband became my assistant as we nursed, bathed and spoon fed bunny. Bunny got better but his head remained tilted and he can only hop in a clockwise direction, otherwise he falls over. When bunny had a relapse we didn't have much hope. We tried a chemotherapy drug - it worked but bunny stopped drinking. Back to spoon feeding, IV hydration.

I petted and talked softly to Meister, while bunny slept and our two other dogs looked on. Meister was a second-hand dog and having my face close to his muzzle made me nervous. He was disoriented. Even though Meister had spent seven years with us, he still had not so pleasant memories of early life with another family, of being chained to a doghouse, no toys, no positive human interaction. When I brought him home from the shelter it was hard to tell who was driving the car - he sat in my lap all the way home.

As I talked and petted, Meister calmed, his heart rate slowed. There was no recognition in his eyes. What would happen now? He tried to get up. I held my breath. He stood. Meister wobbled around the room, stopping long enough to look at me, but wouldn't let me touch him. Finally he lay down behind my chair.

I suddenly realized it was cold downstairs. I put a coat over my pajamas. The other dogs rushed to the door thinking I was going outside. I let them out - Meister went too and came when I called. He seemed wary of the other dogs - very unusual considering he had been the dominant dog. I made some cocoa, watched television and watched Meister. He took a nap. Two hours later I decided I could go to bed. Meister was wiggling and wagging and happy to be petted. There have been no after effects of his seizure.

Last August my husband and I decided not to do the once a month chemo therapy with bunny - even the fruity tasting syrup no longer fooled bunny - most of the stuff ended up in his fur or on my clothes.

What unsettled me Tuesday night was that I never expected the youngest dog (my favorite) to have problems. I expected the next crisis would be with bunny or one of the older dogs. I forgot that nothing is static. I forgot that I don't get to choose the changes in life.

We give care to many people and animals, but we seldom give ourselves a hug or recognition. Now give yourself a hug.

Linda J. Austin writes from experience as a nursing assistance and a family caregiver. "When I was assigned my first hospice case, I found my place in life." Retired from several careers, Linda is studying creative art therapy. 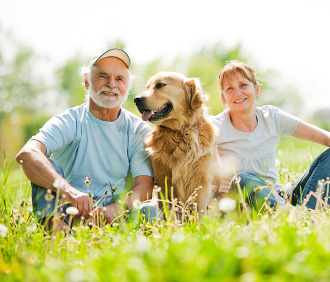